Since January, I’ve cut our monthly “food and household consumable” budget by 25%. While I’m pleased that I’ve been able to pull it off, it has meant a near-total elimination of paying other people to make food for me, and a significant increase in the amount of work I am doing in the kitchen. Making things from scratch is cost-effective (provided certain assumptions about the value of your labor). Unfortunately, the additional work, combined with the uninspiring late winter/early spring vegetable selection (fresh tomatoes seem so far away), has me pretty well exhausted by even the thought of cooking.

Fortunately, it is in situations like these where slow cookers shine. They’re great, not just because you can cook giant quantities of beans in them, but also because you can sneak in cooking before you are too hungry and exhausted by life to exert the effort to feed yourself. Slow cooking — it’s a gift for Future You!

So… This pork. It’s great in tacos, nachos, or burritos. It’s decadent over cheese grits. I’ve eaten it happily in a bowl of ramen. We’ve stuffed regular potatoes with it, we’ve stuffed sweet potatoes with it (definitely try that one). I suspect it would be great in tamales. Put it in your quesadilla! Put it in your breakfast burrito! Add some to your huevos rancheros! Put it on small roll with shredded cabbage and call it a slider! Enchiladas? Sure! Topping for fried polenta squares? Why not! Eaten cold from a bowl straight from the fridge because you can’t even be bothered? Absolutely! It’s dang versatile, and it freezes beautifully. Make a big batch and freeze some. Future You will appreciate your thoughtfulness.

This recipe will serves 8-10, depending on serving application. 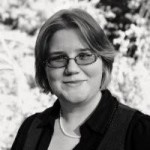 Rachel Shadoan is the co-founder and CEO of Akashic Labs, a research and development consultancy in Portland, Oregon. If she is not playing with data or talking with people about how they use technology, she is probably gardening: her latest gardening challenges involve two sulky citrus trees and some failing-to-thrive chives. She prefers her cruciferous vegetables and Meyer lemons to come in stupidly huge quantities.