Skip to content
I grew up in the suburbs and didn’t really know our neighbours. For some reason, the street we lived on in Thornhill, Ontario, was rather transient in nature. We lived in our house until I moved away and went to university, but many other families only stayed for a year or two and then moved deeper into the 905 regions of Markham and Richmond Hill.

I vaguely remember hanging out with a few other kids when I was really young — ex-pat Jewish South Africans who didn’t stick around into the mid-1980s. But I didn’t have much connection with my street, because I always went to schools that were out of our neighbourhood. At first, my parents sent us in taxis to a private Jewish school, and then I attended specialized arts public schools that required me to take at least two public transit buses. I received an excellent education, but my friends never lived within walking distance.

My parents moved to a new house when I was away at university, so I rarely go back to the street where I grew up. My sense of family isn’t rooted in a particular community or geographic place. So I never randomly bump into people I went to high school with when I go home to visit family.

My roommate in first year university was the child of a single mother and grew up in the heart of Toronto’s Little Italy. She was the quintessential downtown kid — comfortable riding the street car at 2am, quietly street smart and cultured in a way that I envied. My family was never really suburban in the traditional sense of the word. We went downtown often, attended lots of theatre and ate in interesting restaurants. But it was always a long schlep to get anywhere. We needed to leave the house an hour before any dinner reservation. And I always had to make sure to catch the last TTC ride home, curbing late-night teenage adventures. I hated walking across the deserted parking lot of Finch subway station to retrieve the family car and drive the rest of the way home. It was too quiet. I always preferred the noise and bustle of downtown to the eerie silence of deserted suburbia.

I am delighted to now be raising a baby in an inner city neighbourhood. Our house cost a lot more than an equivalent property would have in the suburbs, but the trade-offs are so worth it for us. I have never felt isolated as a new parent, not even for a second. The coffee shop down the street is a magnet for young families, and the baby drop-in at the elementary school nearby is always bursting at the seams. The neighbours across the street with three-year-old twins routinely drop off boxes of hand-me-downs. The family members living on a fixed income down the street are the first to assist elderly neighbours with snow shovelling and other physical tasks. A woman I met at a breastfeeding drop-in at the community health centre recognized me eight months later and invited us to a block party. Daphne has five close friends who live within a ten-minute walk away.

This is not to mention that as a queer family, it’s so important to us that our daughter grows up surrounded by other LGBT families. A couple of nearby schools have become magnets for kids with same sex parents. And downtown schools are more likely to attract children from diverse economic and ethnic backgrounds.

We live near a busy intersection and our nearest pharmacy is home to a methadone clinic. When we put our recycling out at night, all of the beer bottles are removed by morning by people who could use the spare change. I occasionally see a couple of sex workers on Gladstone street, discreetly conducting their business. None of these things bother me. They are part of the fabric of a city. I want my child to grow up knowing that not everyone grows up in a privileged environment and that our neighbourhoods have room for all sorts of people.

Luckily, Daphne is too young to discriminate. She enthusiastically waves “Hi” to everyone we see — the people in our neighbourhood. 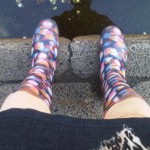 Ariel Troster is a writer and activist in Ottawa, Ontario. By day, she cranks out communications copy for one of Canada's biggest unions. She spends the rest of her time raising a spirited and hilarious baby girl with her wife and co-mama Caitlyn. She writes about the politics of parenting at queerfemmemama.wordpress.com

Comments on Why it’s awesome to raise a city child