Yep, my kid still sleeps in a closet: our post-crib sleeping solution

Those of you who have read Offbeat Families for a while may recall that, since my family of three shares a one-bedroom home, our son's... Read more

It’s April: my two-year-old is snoring in the backseat. I follow the landlords into the apartment complex, noting the “Slow! Children at Play!” signs at both entrances. I spied the little nook where everyone’s bikes and outdoor wheeled toys were jammed together. I ask if there are other families — yes — and are there any noise complaints — no, but the bar across the street can get riled up at peak times. After two years of being parents in college-oriented complexes, I was ready for a place that seemed more family-friendly. Except for the weird amount of grass between the ten buildings, it was perfect.

Oh, how I’ve wished for more grass! I grew up in military housing, where the houses are duplexes and everyone’s yards are smushed together into these huge patches of grass. We ran around with bare feet and more than once ran into the wrong back door. But here? Two of the buildings have smushed patches behind them that could count as yards — one unit inexplicably has a back door, even — but it’s not in a place where the kids can really play safely and supervised. What’s the alternative? The parking lot? With cars?!

Turns out, my son Miles loves running around the parking lot. It’s less about the parking lot, and more about the fact that he loves chasing the other kids who also play in the parking lot, who love throwing balls and riding bikes and rolling stomach-first on skateboards. Out of my 40 neighbors, I’d estimate a third of them have kids, ranging from babies up to a couple young teens. It’s not a sitcom-close neighborhood, despite my dreams of hosting a large barbeque, but the parents I know are pretty cool, and all the kids are protective of each other. If Miles doesn’t come running when we yell “Car!” one of the other kids will pick him up and carry him over to the grass and hold him still. The kids get excited to see him when we go outside, and he does his adorable toddler-waddle-run over to his friends every time.

That said, I get it. Kids playing in parking lots is terrifying; the first time I realized it was a normal thing here, I totally balked. Even my “Eh, it won’t kill him,” style of parenting becomes high-strung and helicoptering when we first step outside.

[related-post]But in this apartment complex playing in the parking lot promotes cooperative play with a wide variety of kids — not to mention it helps socially-awkward me actually meet and interact with parents. Plus, I can bring my coffee mug with me and do it in my pyjamas. So I wanted to offer some hope for other parents stuck with more concrete than tracts of land, so that they don’t spend their summer hiding in the apartment like I did last year.

It’s normal for kids to overtake the parking lot in the summer. Even the college kids know this and drive accordingly; no careening around corners and backing out at top speed. Even so, all the kids know that when an adult says, “Car!” they need to get on the grass. (The “Game on!” afterwards tends to go over their heads.) Miles is probably the youngest mobile child there, and even he’s pretty good about finding me and holding my hand until the car is gone.

I have a threshold of how fast I can run in an emergency — if Miles gets too far away or a car starts coming in too fast. Miles is three now, so we’ve got a basic grasp on “Too far away” and “The road is for cars.” Making sure he understands where he’s allowed to play near our apartment and that roads are never places to play helps him. It’s also allowed me to be more comfortable; one day I watched him walk to the apartment and go right in, in search of Daddy and a Band-Aid. Which reminds me…

Prepare for scraped knees and elbows

Like I need to tell anyone with kids this — but it’s especially true when kids are running and chasing each other all over the parking lot. Thankfully Miles has lots of hit points, and gets easily distracted once he’s tagged a kid and remembers he’s playing.

Don’t be afraid of the other kids

This one is hard for me. I’m very hesitant to interact with children I don’t know, because I don’t know how other parents parent, and because I know how scary strangers are as a parent. But playing in a parking lot, at an open apartment complex, means that I’m a little more paranoid than I am at the park. The key is being calm and polite. I’ve had to ask the older kids, “Hey, do you mind not playing tag behind the buildings? I’d like to be able to see him.”

Once I realized that the older kids understood and their parents weren’t going to freak out at me over it, it was no big thing. They’re great about keeping the young kids safe as best they can while they play. (I mean, they’re kids. It’s not their job, and they don’t always have the best judgment of safe. Review your own childhood for examples.)

Relax and Have fun!

Is that contrary to everything I’ve said so far? I have to make myself take a deep breath and let Miles play on his own, no matter where we are. After spending time with my neighbors and their kids, I’m comfortable with how they play. It took me a while to get there — we spent most of last summer locked in with the A/C, only traversing the parking lot to walk to the pool — but honestly? I’m at a point where I’d rather let Miles go out and play in the parking lot with our neighbors and the kids I can identify by name than walk to the park where he might be the only kid at that time or on that day.

It’s not the right solution for every family or every apartment complex, but it can work. 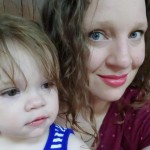 Ashley is a writer working at home while trying to help her child survive his third year of life. Some days it seems like a miracle that they both make it through the day in one piece.