I'll never forget when a friend told me a story about a mom she knew. "She totally yelled at her kid," my friend said. "In public!"

I think a lot about my public Mom persona. My son L is a wonderful, in many ways laid-back but also strong-willed kid. No matter what I say, he's as likely to stop grabbing fruit from the health food store, declaring it a "sample" and cramming it in his mouth too quickly for me to stop him, as I am to win a contest for my math skills (e.g.: not likely). At this point, the health food store people see us coming and hand me a kumquat and a couple strawberries.

At his first swimming lesson, there was a minor scene. I should have known when we got to the pool and instead of sitting quietly on the edge like the other toddlers, L asked me in a loud voice, "Did you bring any water toys, Mom?" that things might be eventful.

I did not bring any water toys, I told him. Shh!

We started off with kid swimming activities like blowing bubbles, jumping up and down in the water, and singing "The Wheels on the Bus" with pool-inspired hand motions. As fast as turning off a switch, L decided he was bored with "Wheels on the Bus." He started straining against me, stretching his wet, muscular little 35-pound body in search of greener pastures. Imagine hard little feet in your abdomen, pushing.

"I want to go in that other pool, Mumma."

Are we protecting our kids from the right things?

Parents don't want their kids to make unpopular choices out of a feeling of love. And also, mostly, a feeling of fear. We love our... Read more

He strained some more.

He shot me a look that read, you can't make me. (And that's when I had some foreshadowing of awkward fifth-grade parent-teacher conferences.) Luckily, he gained interest again and we somehow made it through the class. At the end, Ben gave us a very stern and very scary talk about drowning.

"Drowning happens quickly and silently," he said. "It's not like in Bay Watch."

So, armed with horrible images of Pamela Anderson, I kept L close to me as we left the pool and walked through a little fenced-off section with bleachers where our stuff was. I turned around to find him trying to squeeze himself back through the fence into the pool area. Did I mention he's strong and wily like a snake?

"L!" I yelled again. "You stop RIGHT NOW!" and, catching up with him, I grabbed his arm. Roughly. And we had a very stern talking to. That's when I noticed all those other parents, whose kids had been well-behaved in swimming class, staring at me. All those other parents, I should add, who had not stopped my beautiful son from squeezing himself through the gate back towards the pool even though they were in arm's reach.

I have something of an active imagination, but all evening I wondered what those parents thought of me. Most likely: smart mom, to treat the situation seriously (drowning is the silent, quick killer). Possibly: she's way too paranoid and strict; a yeller. Unlikely, but you never know: abusive. Clearly, I have to develop a thicker skin, because there is a solid chance that in the next, oh, 24 hours, my son is going to behave in public in a way that requires me to reveal something about my parenting.

But we worry, don't we, about what people think? Even parents of the easiest children contend with the occasional wicked tantrum, or a disaster of an eating out attempt, or a terrible diaper blow-out in the airport. Here I am, you think. With my pants down and all my dirty laundry hanging out.

But there are redeeming moments. A few days after that swimming lesson, we were at the health food store again. L discovered the bulk bins and was happily imagining me filling him with gelatin-free jelly beans. I kept asking him not to put his fingers in the bins. But lo and behold, I stooped to scoop some rice and damned if L wasn't wrist-deep in the currants when I came back up. Three people's spying eyes on us.

I pulled him aside.

"L," I said, "I need you to look in my eyes so I know you're hearing me." (His eyes scooted left, then right, up to the ceiling, and down to the floor before landing on me briefly, then darting off again.)

"I need you to do better listening. I asked you not to put your hands in the bins."

Eyes darted everywhere. Finally, he promised. We chose some dates and I let him carry them. Five minutes later I was browsing in the sunscreen aisle when a woman came up to me.

"I just need to tell you," she said, "that you're such a good mom. I saw you in the bulk section with your son, and I was so impressed. Really. Kudos to you."

It made my day. It made my week. Having a stranger witness my ad hoc disciplinary strategy and pronounce me a good mom afterwards? Beautiful.

Thank you, stranger, for filling me with hope that I am doing something right. In public. 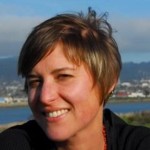 Susie Meserve is a writer, teacher, and mother living in Northern California. She has recently finished a memoir about her year traveling around the world with a man named Ben. You can read more at susiemeserve.com.

PREVIOUS
Top 10 ways to embrace, rather than fight, summertime heat

The new book from Offbeat Home publisher Ariel Meadow Stallings is here to hold your hand while you cry, and then help you put your life back together.