In March of this year I fell helplessly in love. Head over heels, knee-buckling, palm-sweaty LOVE. With a house. My house. My FIRST house.

Hi. My name is Dawn and I am obsessed with my 1959 Ranch house. Obsessed in a good way. Not the creepy Craigslist stalker kind of way.

It has been a life-long dream of mine to own a REAL house. I had spent my entire life in apartments, trailers, and condos. No. There is NO harm in that, but for me, a house signified something; as a child raised by a single mom, I assumed if you owned a house, you had money. It mattered not to my child’s brain that the house might be really small, or in disrepair. I only knew it was NOT an apartment.

I had to own a house someday. It took me 38 years to achieve that goal.

Anyway, I could bore you all with the love story of me and my house. How we met. How she told me she was mine. But you would most certainly turn and run.

Match your front door to your eclectically coral home decor

This beach house for sale in Laguna Beach has a coral-colored lesson for all of us... How lovely does it look when you match the... Read more

So let me get down to business. My house is PINK. Pink stucco. Its been pink since the day it was built. And no, it’s not a fabulous HOT pink, or a sweet, pale pink, its actually a fairly nasty coral-looking pink. It’s dirty. And I don’t think its EVER been repainted.

I don’t live in Florida where a pink stucco house is acceptable and common. I live in Central Ohio, where pink houses are a bit harder to come by.

It needs to be repainted desperately, and it’s one of the next major renovations I am going to do in the spring.

My fiance and I promised ourselves that we would do our very best to keep the architectural integrity of our house while updating her to this century. To that point we have kept a lot, and ripped out little. I guess I was thinking MOSTLY of her interior. I didn’t think much about the outside.

When I first saw the house I knew I would paint it anything OTHER than pink. I assumed my neighbors would be thrilled. It is the only pink house in the neighborhood, and one of the few remaining stucco ones. Most of them have been sided. I even got two estimates! I was so gung-ho on doing this!

I was thinking a nice sage green, OR a nice deep gray blue. It has stone all around it, which I have NO INTENTION of removing, I had to pull colors out of that stone. I also have white accents. So I was heavily leaning towards the gray blue.

Until I started really thinking about the house. And how long it’s been pink. And maybe I should paint it a newer, hipper pink? Would she be sad if she was no longer pink? Would me changing her color somehow tilt the universe a little bit? So I started being wishy washy about painting her again, especially after I read Offbeat Home’s post about houses of unusual colors. I thought how much my neighbors would probably hate it if the house remained pink. I thought about the brownstone that had been painted pink. And although I loved it, it looked so out of place. It was not meant to be pink. My house was built to be pink.

I’m so confused! What do I do? I don’t mind living in a pink house. Not really. I am a bit kooky that way anyway. But, is it logical to repaint her in a nicer shade of pink? Or is okay to paint her a new, more modern color? Am I tempting the architectural Gods by changing her color after 50 years? 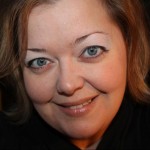 Dawn Bininger is a freelance writer and blogger with a compelling weight loss blog. Dawn is a fan of sports, traveling, food, craft beer, photography, animals, fitness and things covered in cheese! Dawn just recently got engaged in true OFFBEAT style, proposing to her boyfriend beneath the Rocky statue in Philadelphia. She resides in Central Ohio with her two dogs Bode and Zoe, her super cool kitty Ozzy and her NEW fiance Brian.

Comments on What color does my pink stucco house want to be?