Skip to content
Like many first-time pregnant moms, I envisioned that my labor and delivery would go a certain way. I planned a natural birth using Bradley Method techniques, hired a doula, and anticipated laboring at home for as long as possible before heading to the hospital to deliver. I wanted minimal medical interventions and no drugs. I managed to pull off the no pain medication and a vaginal birth, but only after a four-day induction and a heap of drugs helped get me there. Here’s how it all went down.

I was one week overdue when I had a non-stress test. The pregnancy had been normal, and I had no reason to suspect anything was wrong. When the tech doing the test furrowed her brow and said something about a “very sleepy baby” it was the first time I felt worried. My doctor explained there was concern because my baby wasn’t having enough variations; his heart rate was staying a little slow and steady. My cervix was ripe, almost 3 centimeters dilated, and my doctor told me that I should check in for an immediate induction. This seemed drastic, and I responded with tears and begging for more time to go in to labor naturally. My doctor agreed to re-evaluate things the following day.

That night a neonatal specialist who had a chance to review the heart rate strip from the test called to strongly encouraged me to be induced ASAP. I thought it over and when I weighed the safety of my baby against my desire to not be medically induced, there was no contest. I surrendered and agreed to check in for induction the next day.

So, at 41 weeks and one day I calmly rolled my suitcase through the labor and delivery floor. We checked in and were shown to our room. I changed into a hospital gown, unpacked my iPad, speakers, pillow, water bottle, and settled in.

A doctor and nurse come in and gave us the lowdown on how this was going to work. We started with a pitocin test to see how my body reacted to the drug and to see how the baby’s heart rate would tolerate it. The medical team reminded me that since I was already partially dilated to around 2.75 cm, it shouldn’t take long. Someone actually said “It won’t be like one of those awful four-day inductions some women need” and this was my first indication that inductions can be a long and tiresome process. The IV went in, the fetal monitors got strapped on, and away we went. No eating or drinking. No leaving the bed.

Pitocin is delivered in increments of two. You start off with drip at level two, and can increase every half hour until contractions start getting serious. At the hospital where I delivered the max is 20, and I was told that most women start feeling pretty intense contractions by a level 6 dose. During the test my dose went up to 10 and nothing really happened. I felt extremely mild contractions, but mostly I just got hungry, thirsty, and bored with sitting in bed. At 9pm I was told that we passed the test, but no progress had been made. I ate, showered, stretched my legs, and around 11pm I had my first round of Misoprostol aka “miso”, which is an oral medication that softens the cervix. You take it, wait 4 hours, and then check if anything has happened. I took the dose along with some Benadryl to help me sleep and said good night to day one.

At 3 am on day two, I was awoken for a progress check to see if the miso had any effect. The verdict was that I was three cm, not very much progress at all. So we decided to go back on the pitocin and keep increasing it until something happened. From 3 am until around 10 pm that day I sat in bed while we gradually increased the pitocin. Over the course of those 19 hours, the dose climbed from two to the max of 20 and stayed steady at 20 for a long time. It was a long grumpy, boring day of being stuck in bed, unable to eat or drink. We watched movies and hoped as hard as we could for labor to come.

I want a doula, but my partner doesn’t. What to do?

I'm only 13 weeks, so this is super early, but I've been thinking about how much I'd like a doula with me during labor. I'm... Read more

When the doctor checked me at 10pm and told me that I had made zero progress throughout the day, I started feeling pretty low. When she went on to tell me that because my body was not responding to the meds I would probably need a c-section, the tears started flowing and I launched into a full on breakdown. Exhausted from a long day of drugs, my spirit was crushed, my birth plan derailed, and there was nothing left for me to do but to become a heaving mass of sobbing tears and snot. My medical team was rather taken aback by this reaction. They offered me an Ambien and 8 hours of rest before making any big decisions.

The plan of attack for day three was to take two more rounds of miso to basically beat my cervix into submission, and then to go back on the Pitocin to get some contractions in gear. This was the last-ditch effort before c-section time, and I began wishing with every ounce of me I would go into labor that day. It took 8 hours to go through 2 rounds of Misoprostol, and at the end I had dilated to 4 centimeters. I was allowed to have some food, and then we jumped right back into the Pitocin. I was watching Rango in the early evening when contractions finally started coming regularly and I needed to focus to get through them. Halfway through the movie I realized that I couldn’t follow the plot and that it was time to turn it off and do some breathing.

We put on some hippie zen chanting music and I got into my zone. I sat in bed riding the rhythm of contractions and when one rose up I pressed my finger against my third eye, took a deep breath and exhaled it as slowly as possible. When midnight arrived my husband and I were laboring together at long last.

Day four was November 2nd AKA Dia de Los Muertos, which happens to be my favorite holiday. Given that my husband and I had a Dia de Los Muertos themed wedding, it seemed a fitting day for our son to be born. At 1am I told my husband to call our doula because I wanted her support. Moments later I had a really strong contraction and asked my husband to push on my forehead. At the height of the contraction I yelled “push harder!” and when his thumb dug into my forehead, I felt a pop followed by a long gushing sensation. My waters had broken and suddenly pain jumped from a 5 to an 11 sending my body into shock and I began violently puking. Things were getting real!

The nurse came and told us there was some light meconium in the amniotic fluid. She also said that it was time to move to the room where I would deliver the baby. I thought that was the craziest thing I have ever heard. She wanted me to walk down a hallway? While I was in so much pain I couldn’t stop puking? She was hilarious! Our doula arrived and with her on one side, and my husband on the other, I hobbled the twenty steps to the new room, pausing for a couple contractions along the way.

In the new room my husband and doula took turns sleeping and assisting me by putting pressure on my lower back and pressing on my forehead. I went deep within myself and pictured the contractions like waves, rising and falling, washing over and consuming me with a crash, and then flowing back to sea. I nodded off in between contractions and this seemed to go on for an eternity. At some point I look into my doula’s eyes and told her that I was pretty sure I was going to be in labor for the rest of my life, and she assured me that I wouldn’t. I didn’t really believe her though.

Around 7am the doctor checked me and said that my cervix was complete. I labored down until I felt the need to move from the bed. I made my way to the toilet and the overwhelming urge to push overtook me. I had a big involuntary push, and I uttered the most guttural sound my body has ever generated. After that I reach down and felt my son’s head emerging and I remember thinking “This is primal! This is nature in action!” and then I cried out “I’M AN ANIMAL!”

With help, I waddled to the bed while crowing. The delivery team arrived and after two giant pushes, wherein I thought my body was catching fire and that I splitting in half, my son emerged and I felt immediate sweet relief. It was 9:15 am, 11 days after my due date.

My husband cut the cord and then, because of the meconium, our son had to be evaluated. It took a few scary minutes for him to pink up and let out his first cry. Eventually, my husband brought our sweet swishy bundle over to me, and we cried too. He was 9 pounds 1 oz, 21 inches long, and the most beautiful little alien human I’ve ever seen.

Immediately after birth, we didn’t know about the x-rays, EEGs, IVs, MRI, blood gasses, and three-week NICU stay that would arrive to test the strength of our new family. We had no inkling that in nine days’ time we would find out that our boy has a rare neurological birth defect called Joubert Syndrome, and how much this special child was about to change our lives. At that time, it was just my husband and I, our perfect boy, a whole lot of happiness and an eternity of love. 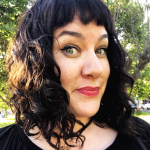 I'm a crafty vegetarian first-time Mama exploring this adventure called life with my husband and son in Oakland, CA. We live in a tiny yellow house next to the freeway with two cats, a garden, and lots of laughter.

Comments on My pain-med-free four-day induction