For the week leading up to New Year’s Eve a few years ago, I had a friend who is something of a cooking inspiration staying with us. She makes amazing dishes, and always manages to get me excited about cooking.

And so came the morning of New Year’s Day, and while we weren’t feeling entirely seedy, we were craving something greasy and delicious. I didn’t have enough eggs in the fridge to do a stock standard bacon and eggs breakfast, but I also needed to use the bacon pretty soon. Then the lightbulb came on: bacon pancakes.

Turns out I’m not the first person to think of this taste explosion (thank god), and after trawling through a half-dozen recipes online, it seemed pretty straightforward. They turned out more amazing than I could have expected. The resultant pancakes are rich, filling and delicious. So here’s my recipe, kindly shared so this bacony heaven can take over the world.

First, trim the rind off the bacon, but leave some fat and fry it until it is just starting to go crispy. The more bacon grease that is left in the pan, the better. This is because you’re going to cook the pancakes in the bacon grease, and lean bacon won’t yield anywhere near as much fat. (Hey, I never claimed this recipe was healthy!)

Since I can't afford to go out to brunch every day, where I'd be able to fill my maw with eggcellent dishes (I'm sorry, you... Read more

The bacon should be slightly crispy but still have a good meaty texture. Remove from pan.

Using a blender, combine all the wet ingredients in the jug first, then add the dry ingredients. Blend vigorously for a minute or until all ingredients are combined and form an ultra smooth batter. The vigorous blending makes a very fluffy batter. Other recipes say to mix until just combined, stirring as little as possible, so if you don’t have a blender or an electric beater, this might work. However, I’ve never had any success with this method. The blender beats all. (Haha, geddit?) Transfer the batter into a mixing bowl.

By now, the bacon should be cooled enough to handle. Cut the rashers into smallish pieces (2cm²/1inch² should be perfect) and stir into the pancake batter.

Using the pre-baconed frying pan, spoon in enough batter to make a pancake roughly five inches in diameter, ensuring you get a decent distribution of bacon pieces in it. When bubbles begin to form and stay open like little holes in the pancake, and the bottom is nicely golden, flip it over and allow to cook through.

Serve with butter and a drizzle of maple syrup, and prepare for your head to explode with awesomeness.

Another possible way of preparing the bacon, if you don’t want to leave the fat on the bacon, is to cut away the rind and fat, and fry the fat separately to extract a good dose of bacon grease. My father used to make bacon rind crackling this way, and has the added bonus of reducing waste.

So there you have it. Kaelee’s Amazing Maple Bacon Pancakes, my official hangover cure of all future hangovers. And, y’know… for whenever maple bacon pancakes are a good idea. Which is always. 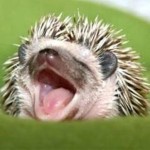 Kaelee Squires is a retail manager for Lush Cosmetics in Australia, a Green queen extraordinaire, and a wannabe writer. When she's not saving the planet with her special brand of environmentalism, she's got her nose buried in a book, or up to her elbows in compost in the garden. She is a rare species of chameleon whose defense mechanism results in hair that is constantly changing colour.