Skip to content
So it turns out that playdough is actually as easy to make as everyone says. Who knew?

Well, OK, nearly everyone. Despite frequently being told that it was super easy to make, I always thought it would be hard to get it to turn out just right. This is probably because I have a vivid memory of my Mom making a disastrous attempt at playdough when I was a kid. I’m not sure what we did wrong back then, but whatever it was, I was able to avoid it this time.

Our playdough turned out absolutely perfect, without a doubt every bit as good as the store-bought stuff. And my not-quite-three-year-old son loved helping to make it.

Cooking this stuff was pretty strange. At first it really didn’t seem like the goo in the pot could possibly work out, but after a few minutes stirring it on the stove it quite suddenly changed texture and voila! We clearly had acheived playdough.

Here’s the recipe we used:

The recipe said to add the color to the water, which did make it super easy to blend it in, but it also meant that all the playdough was the same color. I used yellow, and then took about half the finished dough and worked in some blue coloring to make green. (I would also have made some orange, but then I discovered we have no red food coloring — I think it all got used to make fake blood a couple Halloweens ago.) It was pretty easy to work the color through, and kneading the dough while it was still warm helped to work it smooth. Next time I don’t think I’ll worry about coloring the whole batch, and instead split it up after it is cooked and make several colors.

My son’s favorite thing to do with the playdough is to make cookies. If I set him up with some cookie cutters, his toy rolling pin, a plate and a spatula, he’ll really crank them out!

With cold, rainy weather settling in and lots of indoor playtime in our future, I’m really glad to have finally taken the plunge and made my own playdough. Seriously, give it a try! Take it from me: it’s as easy as everyone always told you. 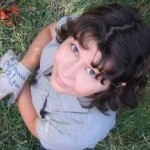 Comments on Making your own playdough: it’s as easy to make as everyone says it is