Today, we talk about JACKFRUIT! Those of you in Australia/NZ, Asia, and maybe even the southern US know what I’m talking about: the rest of us can find it canned or in Asian groceries — if you find the recipes as enticing as I did. -Cat

Near our house is a botanical garden which includes a small, pathetic tropical fruit orchard. We visit every now and then, usually bringing home a few lemons, but not much else. Most of the things growing there are not super productive, because they aren’t cultivated or cared for, and there is usually only one tree from each species. The trees are also labelled with nothing but a name (and sometimes not even that), so it’s hard to know when things are ready for picking. A few months ago we grabbed a jackfruit, but when we cut it open it oozed so much latex that we got scared and threw it away. Then we saw Australian celebrity chef Luke Nguyen make a salad with green, unripe jackfruit. He talked briefly about how to cook it. That was enough to inspire us to have another go.

We learned from our first experience, and our second visit to the jackfruit trees was replete with secateurs and plastic bags so the latex didn’t get all over the inside of my bike bags! Since there were two varieties of jackfruit growing, we decided to get one fruit from each.

We got home and furiously googled how to work with green jackfruit. We re-watched Luke Nguyen, surprised at how little he actually had to say about cooking the unripe fruit. But mainly, we improvised.

Preparing for the mess

The first step was to lay a whole lot of newspaper down. These are messy fruits, oozing latex similar to wood glue, and when THAT congeals the fruit drips brownish liquid. We coated the knife and Andy’s hands with cooking oil, which keeps the latex from getting a grip (mostly). And then we cut.

Is this scenario familiar to you? You go out to a restaurant with a bunch of friends and one of them spends half an hour... Read more

We used a shitty, second-hand steak knife for fear of ruining a good knife with latex. Turns out we didn’t have to worry — we used more cooking oil to clean up later.

In the name of scientific experimentation, we cut some big chunks and some little. We put the fruit into the pressure cooker, because the idea of boiling for 45 minutes was not appealing. Our pressure cooker isn’t big enough for two jackfruit, so we did a few batches, which let us play around with cooking time. 10 minutes seemed to be good for the big chunks, and seven or so for the smaller bits.

Once jackfruit are cooked, they must be processed. We cut off the peel and the core. And we found that our jackfruit had two sections with very different textures, so we separated them out.

Around the core are a whole bunch of seeds, surrounded by seedpods. These were similar in texture to cooked potato. Filling in the gaps between the seed pods, and out to the skin, was some shreddy stuff — sort of like an artichoke, but also a lot like cooked, shredded chicken. When our two jackfruit were done, we had two BIG bowls of each texture.

We put some in Ziploc bags to share with our more adventurous friends, and then hosted a Jackfruit Dinner Party! Again, I looked all over the internet for recipes, but we mainly improvised. Andy put together a jackfruit and tofu Salad, based ever so loosely on Luke Nguyen’s recipe that inspired this whole thing. Andy’s salad also had mango, and peanuts, and skipped a few of Luke’s ingredients. For this salad, we used only the shreddy bits. This was a party favourite — it was sweet and salty and spicy, fresh, and light, perfect for the tropical summer.

In a sort of cross between Indian and Thai cuisine, I made a curry from the seed pods (with the seeds cut out, because they have a plastic-y skin which is not very nice). They cooked for just a few minutes in a sauce made from coconut cream, fresh turmeric, ginger, cumin seeds, and chilli.

And the final dish was BBQ jackfruit, which made its way around the vegan blog world a few years ago as a substitute for pulled pork, using tinned jackfruit. Fresh is obviously much better.

For this, I made a batch of BBQ sauce (I used a recipe for tamarind BBQ sauce from the cookbook Urban Vegan, but really any sauce will do), and then added some shreddy bits of jackfruit and let it simmer and soak. The longer you can let this sit, the better it will be, so I cooked it the day before the dinner party and then warmed it back up.

We were all really happy with how versatile and yummy jackfruit is. I even invited a few ripe jackfruit haters, and they were surprised at how different it is when it’s cooked like a vegetable. It was a lot of work, and messy, but considering how much food you get off of just one fruit, it’s totally worth it. Anyways — how cool is it to pick fruit from a park and turn it into dinner? 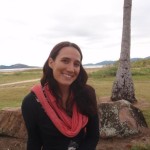 Theresa moved from icy cold upstate New York to tropical Queensland, where she teaches sociology, rides a bike, crochets, and plays with her cat Nacho. She dreams big about growing her own cornucopia of tropical produce, but until then she’ll stick with a bit of foraging. She blogs at The Tropical Vegan.

Comments on How to handle jackfruit — and three recipes to use with it!