Disclaimer: This post is sexually explicit, so if you’re at work, or if you embarrass easy, you may want to come back when you’re alone.

Today I want to talk to you about the magic wand. Sorry Harry Potter fans, not that kind of magic wand. I’m talking about this magic wand…

So, you've decided to improve the quality of your self-lovin' (and couple-lovin'). Good for you! You wander cautiously into your local sex shop or website... Read more

If your toy collection does not include this, order one NOW.

The Magic Wand has been around for quite some time

Since 1968! It was originally used as a personal massager for sore muscles. I have used it on sore muscles in my neck, shoulder blades, and even a sciatic nerve problem once and it worked fabulously. But it has been made legendary by shows like “Sex in the City” and books like “Fifty Shades of Grey.”

It is a plug in toy and, yes, you can use an extension cord

Actually if you’re using an extension cord I would love to hear your story… Are you walking around the house with this? Or have you taken it over to the neighbors for ladies night? Or the morning coffee club? NOW, that would be a great follow-up post.

It has some startling, almost overwhelming horsepower. It has two speeds, low and high — 5,000 rpm vs 6,000 rpm. Did you just spit your soda with shock and disbelief? Well, wipe your face off and calm your nerves, because I was NOT kidding. I personally cannot use this toy on high, and probably never will.

With the kind of power this toy puts out, it is not quiet

This is not a toy you want to play with when anyone is nearby, when your baby is napping, or when your teenage girls are upstairs. Unless you have an unbreakable lock on your bedroom door and have very loud music playing, as the noise it makes is one thing — but the noise it will MAKE you make is another.

Now to the head of this toy…

It resembles a microphone. I have put it to my lips out of curiosity, it will vibrate them right off your face. Most importantly, do not stick this toy where the sun don’t shine — without the attachments it is an external toy only. Unless you want to be a bad (hilarious) story the ER doctors and nurses tell for years to come, do NOT stick it in anything — that includes water. You will be electrocuted.

I’m not a professional Hitachi master, but it can be put on your nipples, on or in between your balls, and on your rectum, for very intense stimulation.

It also can be used as a couples toy

Good old-fashioned soap and water works best. I do know they make toy cleaners, but I just don’t trust the chemicals in those things

So, if you’re ready for the Cadillac of sex toys, then this is a must-buy. Maybe put it on your holiday gift list — I am sure Santa would love to come down your chimney with this gift. 😉 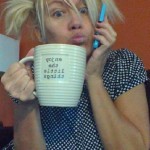 I am a serial blogger. I write about anything and everything, generally stuff your mom won't tell you and shit you really WANT to know.

Comments on Let’s talk Magic Wands: Can you handle the Cadillac of sex toys?