I have ferrets. Lots of them.

I originally bought my first ferret while in college. I walked into the pet store after having researched the crap out of them, just to take a look — a pre-buying browse if you will. There was only one ferret left — having just come out of quarantine after being returned as the original purchaser found out she was pregnant. I took one look at her, and overdrew my bank account for her. I was in love!

About a month later, I discovered that ferrets can get lonely. Not that she gave any signs, I just stumbled across the information on someone’s blog. This was circa 2004… I didn’t have the Google-fu I have now. So I went to a shelter to adopt another ferret. They immediately took to each other and it was happily ever after! Until a few months later when my partner at the time saw a boy ferret at the store. And then again a few months later I got another one. Neither of these last two did my first ferret like. She was very aggressive with them. That was when we learned that it was a distinct possibility to have a ferret that wants to be alone, or only “bonded” — as in one friend/mate.

Yet somehow we ended up becoming an emergency rescue home, and also a place various ferriends (friends you make from ferret play groups) could drop off their ferrets for adoption. Thankfully, all of these eventually found other homes. We just couldn’t say no to such small, defenseless animals! Okay, maybe it was more me that couldn’t say no.

They love to play — all the time. They sleep a lot, so you can leave them alone while at work and not worry. They are very curious. They are loving but not usually cuddly. At less than two pounds, it is pretty hard for them to jump painfully on you in the middle of the night, or really demand attention or petting. However, they can lay down at your feet in “flat ferret” position, and demand attention that way. Don’t step on them! They are resilient and flexible, but not squish proof.

Ferrets are a lot of work

They can be trained, but only to some extent. Even litter pan trained, they will still have accidents. Or they will look at you, make sure that you are watching, and poop right next to the litter pan. They need to have their nails cut, or be given a good soil box with wood to dig in, to keep their claws down. They have to have their ears cleaned and teeth brushed. They can be distracted for some of these things with a delicious treat known as Ferravite, or, by its street name, “ferret crack.”

Bonus fun with ferrets happens when you take them out walking

They can be leash walked. This means you will get stopped by a lot of curious people. They love it, mostly, because they love new places and exploring. They have short legs, and don’t go fast (except when they want to escape, they can somehow go faster than you), and get tired quickly. Also, be aware that a few people will call them disgusting rodents, scream in fear, and generally avoid them.

You have to ferret-proof your home

Say goodbye to recliners! Block off that tiny space under your heater and similar gaps. Baby proof/lock your cabinets, so they do not get into your chemicals. Although, sometimes clever ferrets can still get past your ferret-proofing. Seriously, it really is like they just try to get killed and you are fighting an uphill battle. I mentioned curious and smart? Yeah… when a pet can open buttons, snaps, zippers, and velcro, you are pretty much screwed on keeping them out of anything.

Their cage is a very important piece

Offbeat Homie and frequent contributor Allison just turned a thrift store hutch into a house for her rats! If YOU have pet rats, you'll want... Read more

You need to have enough private space for each ferret to be alone, and a large space for all of them to create a multi-ferret fur pile. Aside from that, they need stuff to occupy them. I recommend a tube system to get up and down, instead of the ramps the cage comes with — it is so much more entertaining for them.

Chase them. Toss their toys and watch them chase them down. Turn them over on their backs and tickle their sides. Take a small blanket or t-shirt and cover them, then lift it up in an endless peek-a-boo. Make them a slide. Make them an enclosed playground by getting a tote, cutting holes high into the sides and putting tubes up to those holes. Fill the tote with various things from soil, to grass, to sand, to balls, to packing peanuts. Watch them go nuts! Gut-busting laughter will ensue. Try something new every week.

Most of all, love the ferrets while they are here. They only live about an average of five years.

Ferret parents! What else would you add to this post? 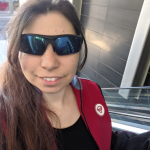 I am a fancy software application specialist with a love of reading and all things furry, tiny, and lovable. I live with my husband, brother, another couple, 4 ferrets, and 4 cats in a 3-bedroom apartment.

Comments on Everything you ever wanted to know about owning ferrets