When we bought our new place in December we knew one of the first things we wanted to do was install wired ethernet connections. Not only will this make it easy to set up multiple wireless access points for better coverage, it will also provide a high speed backbone for data throughout the house.

In addition to bringing the internet connection to each room, the wired local network (LAN) will allow us to stream high quality video and audio throughout the house.

First, why hard-wire for ethernet at all?

Setting up a wired LAN in your house is somewhat unusual, because most people do just fine with a wireless connection. But it does offer some distinct advantages over an exclusively wireless network:

Now, how to install the cables

Each room in the house needed two or more ethernet cables, all running down to a closet in the basement. I'm not going to lie, running thousands of feet of cable through our walls was not a small task. Our place has four floors including the basement, and at 7 months pregnant I'm not exactly handy around the house. We hired an electrician to run the wires, and then did all the terminating and finishing ourselves.

We installed a total of 34 drops (aka individual cables) and went
through about 4 boxes of Cat6 ethernet cable.

Tune in: Do these 5 things to optimize the shit out of your home entertainment

This electronics aficionado will help you save money when you buy cables, pick the right TV for your needs, and avoid new tech pitfalls.

Here are two unterminated cables sticking out of the wall, just as the electrician left them. The orange ring is a bracket for the faceplate to screw into. Each cable gets a RJ45 keystone jack, which is the little plastic connector you plug your ethernet cable into. Cat6 cable is made up of 8 individual wires, each of which is arranged carefully in one of the slots on the keystone jack. In the photo below, the near side has been punched down, which pushes the cable into the slot and trims the excess. The far side is still waiting to be done. The black plastic holder makes it easier to keep the jack from flying out of your hand, as the punchdown tool requires a fair amount of pressure.

The keystone jacks snap into a faceplate, which is then screwed into the bracket in the wall.

All the cables run down through the house into our basement closet, which is where the router, switch, and media server live. Each drop has a small sticker on either end to help us keep track of which one goes where. To save my sanity, I used masking tape to temporarily keep the basement wires in alphabetical/numerical order while working on them.

Instead of individual keystone jacks, the basement ends are terminated into one of two patch panels. This makes them easy to access when we're ready to plug them in. Just like upstairs, the individual Cat6 wire strands are punched down into the slots of the patch panel. I placed some green felt down to protect the tile floor.

Once everything was punched down, the patch panels were mounted into a half-height server rack. If you're going for a more minimalist setup, there are smaller wall-mounted brackets you can use for your patch panels.

The lines from the walls (blue) go into the patch panels, and from there some short 6" ethernet cables (rainbow) connect each jack on the patch panel to a jack on the switch. The switch acts like a hub, connecting all the cables to the same network. We had so many lines we needed to get two switches. Each switch is plugged into our router (the small black box floating haphazardly on top of the rack). By plugging our Comcast modem into the router, we're able to share our internet connection with every device connected to the LAN anywhere in the house.

Since we do still need wifi signal, we connected an old wifi access point to one of the jacks on the top floor. The router in the basement is also a wifi access point, and the two cover our house fairly well.

There's a little bit of configuration needed to keep the access points from interfering with the main router (specifically, turning off DHCP).

The next step for us is to set up the media server, which is a computer that will be mounted on the server rack to share all our videos and music with all the other computers on the network. We're using a program called XBMC to manage and watch our videos.

Why NOT hard wire for ethernet?

If a hard wired LAN is so awesome, why doesn't everyone have one?

But if you decide this is right for you, I hope my overview of installing Ethernet helps! 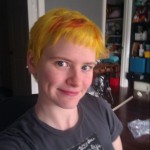 Kellbot is a crafty hacker who is in the middle of a three part crash course on becoming a grownup by getting married, buying a house, and having a baby all in the same year.

Comments on Nerding out: how we wired our house for ethernet