Thursday came, and I updated my written birth plan and medical history sheet. I had become sick of repeating my surgical history every single time I entered Labor & Delivery Triage.

I printed three copies of the birth plan. I gave two to my partner Jonathan, and I kept one to give to the nurses upon admission to the triage area. When I arrived, the contractions weren’t regular… they were anywhere from 6-10 minutes apart. I was dilated “A pinky fingertip” which was “Half a cm, maybe?” according to the resident. I was hooked up to the non-stress test. I mentioned I had a headache. I was given Tylenol. The headache didn’t budge. In the meantime, the doctors noticed my elephant-sized feet. They decided to test again for pre-eclampsia, which it turned out, I had.

The doctor on call came in then, to tell me about his decision to admit me to Labor and Delivery. He counseled me on pre-term babies, but then added, “As of midnight tonight, you’re 37 weeks, which is considered term. New York State wants all doctors to counsel women to try to keep their babies in until 39 weeks, but if you have the pre-eclampsia, the only thing that will make it better is to deliver your baby.”

First, I needed headache relief. Tylenol did nothing for me. Percoset allowed me to sleep, because it made the pain in my lower back from the contractions go away, but the headache remained. At about 4 or 5 am Friday, I was given Staidol. What a trip! I felt like I was on every ride at the amusement park at once. The room was spinning, and I was hallucinating. I screamed, I was confused, it was horrific, but my headache disappeared. I decided that I would rather deal with a headache next time rather than take Staidol again, but it was important for the doctors to know how bad my headache was. Finding out what lengths it took to relieve the pain gave the doctors an indication.

When I came back down to earth from the hallucination, in the room I’d been admitted to, there were several doctors present. I was again counseled on birth before 39 weeks, and the risks associated with it. I was advised that pre-eclampsia can turn into eclampsia, which is a seizure disorder. The only way to avoid this is to have the baby, so they wanted to induce. The doctors told me that it could take three days to induce. They would have to use a pill insert called Cytotec. The pill would be inserted manually, by a doctor, right onto my cervix.

I was put on a schedule — I could eat every four hours. Two hours after every time I ate, I would have the Cytotec inserted, and be checked for progression. By Friday evening, I was having steady contractions, so after dinner, I wasn’t given any Cytotec. I was only dilated 1 1/2 cm. I was in pain, and panicky at this point. I told Jonathan, “I’m sick because of the baby being inside me. The quicker she gets out, the quicker I get better. I want a Cesarean section.” He told me that wasn’t in my birth plan, and tried to calm me down.

Empowered by a caesarian birth

Caesarians are not always celebrated in the Offbeat world, but they are a very real part of the labor & delivery process many women experience.... Read more

Saturday morning, I was only dilated 1 1/2 cm. A final dose of Cytotec was administered. Jon started talking about getting breakfast from the coffee shop. Then, the nurse came in, and started moving the fetal monitor around. She could find Lucie’s heartbeat, but Lucie kept moving, and when I had a contraction, her heart rate would drop. Jonathan waited about 30 minutes, but doctors still hadn’t come in, so he went down for breakfast.

Another 1/2 hour later, the pediatrician came in and started to ask about my request to feed the baby Similac, and asked if the formula I brought was ready-to-feed or powder since I was going to have a Cesarean section, and the baby would be delivered soon. I said, “Oh, wow, they hadn’t told me I was having a Cesarean section!”

Ten minutes later, Jonathan returned from breakfast. Two doctors and two nurses came in to my labor room. One doctor said, “Well, the tracing shows the baby is minimal reactive, as I’m sure you’re aware, and at this point you are only dilated to not even two cm. To continue this lengthy induction…” I cut the doctor off at this point, and said, “Get her out healthy, I want the Cesarean!”

Before I could be given a spinal block I had to drink an anti-nausea medication. Then I received a series of shots in my spine which numbed me from my rib cage down to my toes. I was laid down and I became very nauseous. I turned my head sideways, but the anesthesiologist told me to turn the other way (so I didn’t puke on his equipment). The anesthesiologist retrieved a basin to puke in and cleaned me up. Ironically, I had thrown up the anti-nausea medicine. Jonathan was allowed to enter at that point. I was a bit groggy, but then I felt nauseous again. He held the basin in front of me, and cleaned up the puke from my face. That made me love him more, and know that he would be a great dad.

There were a lot of pulling sensations and rocking sensations while the Cesarean section was being performed. I kept asking them to straighten my left leg, because it had been slightly bent when it was numbed. My leg was straight, but I still felt it was in the same position. I felt really cold, like I’d gone outside naked in the snow to make snow angels. The anesthesiologist put a plastic sheet over me, and had a Shop-Vac looking contraption pump warm air over me.

At 11:43 am, I heard someone announce, “11:43 — It’s a girl!” Lucie was brought over to the warmer immediately. Jonathan had been told to let the pediatricians do their thing for a few minutes before going to check on her. I asked what color her hair was, and the pediatrician said that it looked red, but they were still cleaning her up, and she was still covered in amniotic fluid. I asked if we could make a phone call. I had tucked my iPhone in Jonathan’s pocket prior to being whisked off to the O.R., and I just really wanted to call his grandma and tell her that it was a redhead! We knew how important it would be to her.

When she heard her Momma ask for her cry, Lucie did just that. She just whimpered, not very loud, but it was enough.

We called her as the doctors began to put my organs back inside and sew me up. I realized then that I hadn’t heard Lucie cry yet, and I asked, “Why isn’t she crying?” That was the scariest realization, but then when she heard her Momma ask for her cry, Lucie did just that. She just whimpered, not very loud, but it was enough. Then Jonathan was allowed to hold her, and he brought her close to me, so that I could see her.

I wanted to touch her pretty head, and her hands, but I had my arm strapped down, and the doctors were still putting Humpty-Dumpty back together again. The nurse offered to take a family photo with Jonathan’s camera. The doctors told Jonathan they were finishing up on me and he’d have to leave so they could maneuver me around. Lucie needed to go to the NICU for a minimum of 15 minutes, because she was a little groggy since I’d been on the magnesium sulfate for the pre-eclampsia. I asked Jonathan to go find out where the baby was.

Lucie weighed in at 5 lbs. 13.8 oz. at birth, and she was 18 1/2 inches long. My sister had accidentally bought a preemie outfit for the baby… but sometimes these things work out. That outfit was in my diaper bag which was brought to the nursery. When the nurses handed the baby over to me, she was wearing that outfit. Lucie was born on January 21st, four days after my contractions began. It was a complicated delivery, but the most important thing is that Lucie is a healthy and happy baby, which she is. 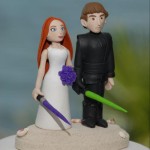 Barbara Reggio is an entry processor for a US Customs House Brokerage. She has recently relocated from Long Island, NY to Columbia, SC and is experiencing culture shock currently. When she is not working, Barbara enjoys long walks at the zoo with her husband and daughter.