While February 2nd is known as Groundhog Day in North America, in Europe, we don’t have groundhogs (or Bill Murray), but an old pagan-turned-Christian celebration. In France, it is called Chandeleur, aka Pancake Day! Everyone, Christian or not, rejoices in stuffing themselves with crêpes (French-style pancakes).

Now we don’t need excuses to eat pancakes all year long (and we certainly want to), so here’s my recipe…

Following the above order, pour the ingredients in a large bowl and whisk slowly before you add each ingredient. You should obtain a runny batter, like thick milk. If it’s clumpy, smooth the hell out of it with a hand blender.

Let it sit for up to 24 hours in the fridge if you can. If you can’t, just start making crêpes already.

Heat a pan with a tablespoon of oil. Add some batter with a ladle. Tilt and turn the pan at the same time to allow it to spread thin. You can also add some batter, let stand for 10 seconds, then start spreading the batter around the pan with a wooden spatula.

Go to “fucking waffle heaven” with these Nutella waffles

I used a box mix for the waffles, but jazzed them up with my homemade candied hazelnuts and Nutella sauce. It's heaven. Fucking waffle heaven.... Read more

When the edges are golden, you can flip it. Flip it dramatically in the air with an elegant flip of the wrist like a seasoned pro while saying “oh la la.” Or simply adopt the no-fuss, no-mess way: take a wooden spatula and flip it sternly.

The first crêpe is always messy. ALWAYS. It will burn, or you’ll have to scrape it off the pan like mad, or it will tear. It’s ok. It will be yummy anyway.

After the first crêpe, things should be smooth: you should be able to cook and flip the crêpes without them attaching to the pan. Cook the whole batter, piling the crêpes in a plate, and leaving it in a low-temperature oven (50°C) until you eat them all. They keep fairly well in the fridge, too.

This recipe is a blank canvas on which you can eat whatever you like. Food snobs will argue this is a sweet recipe, and that savoury crêpes ought to be made with buckwheat flour. I say: Whatever, this recipe is delicious both with sweet and savoury stuff. So here are a couple of suggestions for 1 crêpe:

Everything goes well with crêpes, so try your favorite combination of food. We often serve them as a crêpe bar with a lot of ingredients and everyone just chooses what they want.

If you’re with friends, just put whatever you fancy in, roll it like a tortilla and eat with your fingers. If you have to behave, fold it in half and use fork and knife. It’s not as much fun, though. 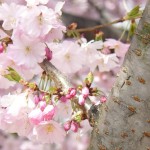 French self-employed translator who just moved to New-Brunswick, Canada, with husband and kitteh to experience the Canadian way of life. So far, I'm missing cheese, but I can't get enough maple syrup. I'm your stereotypical crunchy person, and I'm ok with that. I also luuuuve cooking.

Comments on Easy French crêpes for sweet or savoury meals