We have reached a point in our home where “blaming it on the dog” has become a regular activity. Harley is an eight-year-old shepherd mix that, up until a few months ago, was super-active. It was this activity that caused him to completely tear a cruciate ligament in his left knee. We’ve dealt with the surgery and recovery so now we’re on to rehab. He’s doing great, but the months of inactivity have not gotten along with his digestive tract. Dogs, like humans, need regular activity to help keep things moving. So now that we’ve started the walks and exercise, my wonderfully loving four-legged companion has turned from Pluto to Gas Giant! (Yup, that’s a little Disney/science mash-up for you.)

For the past few weeks my partner and I have been keeping magazines close at hand to fan noxious odors in the other direction, keeping oil burners going almost 24/7, and banish our loving friend to other parts of the house. We’ve had to even go as far as to sleep with the window open (in March!) to avoid finding ourselves being woken up in a gas chamber.

I know Harley’s food had a major role in his digestive distress but unfortunately due to a special diet and picky eating on his part, changing his food was not an option. He doesn’t eat quickly. He grazes throughout the day. So what to do… Thank gawd for Google!

After reading through piles of fart jokes and seeing the dark side of the internet I found a forum where someone was honestly looking for an answer to the same gaseous problems. Down towards the end of the comments, a poster suggested yogurt as an addition to the dogs food to help get their workings in order. I went back and forth on this for awhile… Harley has been on a strict dog food-only diet all his life, how would his body respond? He’s so picky — would he even eat it? And most importantly… would it work? It was then that a repugnant haze filled the room, and I grabbed my car keys and was out the door.

I ended up buying a four pack of plain yogurt and, with crossed fingers, held the open package out to the dog. I have never seen Harley so excited about food before! It was like he knew that what I was offering him would be the answer to all our woes. For four days our home was flatulent-free and it was wondrous. Until day five… I was out of yogurt.

“Bah,” I thought, “I’m sure it’ll be fine.” Let me tell you, ladies and gentlemen, it was not. Within moments of his usual yogurt time, the apocalyptic exhaust was back. And we spent last night breathing through pillows, and again sleeping with the window open.

The next morning, I went straight out to the store, and within minutes of my return, the air cleared. From this day forward we will never go without yogurt again! 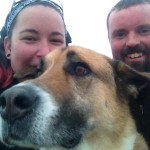 In 2012 my partner and I, packed up our dog, two cats, lizard, snake, and our whole big city lives to move to a small town on Vancouver Island. It has been an adjustment but we're making it work!

Comments on How yogurt saved me from my dog’s farts