I’ve been baking all of my own bread since the beginning of 2013. What started as a little experiment has now become a point of pride that I refuse to backslide on. Whenever I mention this hobby to someone, once they’re done rolling their eyes and reminding me that one can buy loaves of bread at the supermarket, they start asking questions.

Thinking of diving into baking your own bread? Here are the answers to the most frequently asked bread-baking questions…

Why did you embark on this project?

At the beginning of the year, I felt like I had gotten rather sloppy about what I was choosing to buy and I wanted to get back in the habit of making things from scratch.

What do you mean you “bake all your own bread”?

Initially, I was pretty strict about this, but as time has gone I’ve gotten more lax about what qualifies as “bread.” I enjoy baking bread, and it’s a privilege to make my own, but I don’t want to drive myself crazy. In the past year and a half I’ve bought plenty of bagels, English muffins, tortillas, and the like. My bread-baking applies to sandwich bread only.

How do you make time for that?

First of all, it should be noted that my husband Brian and I consume less bread than a lot of people. I eat it pretty regularly for breakfast, but we don’t eat sandwiches routinely for lunch and we have no kids. So a loaf of bread generally lasts us a week, sometimes more. Whenever I bake bread I make two loaves, sometimes more.

The joys of sourdough starter ownership

Early December, the gods brought us Audry II -- our sourdough starter from King Arthur Flour of Norwich, Vermont. We now take it out once... Read more

But yes, it is a time-consuming project. As with many things, the more you do it, the more manageable it seems. I generally try to bake on a free weekend morning or afternoon. There is the occasional panic when I realize I don’t have any empty mornings or afternoons in which to bake bread and get a little freaked out. But when something is important to you, you make time for it.

Part of the way I get away with not constantly baking is storage. Since I bake more than one loaf at a time, I generally only have to bake every 2-3 weeks. When cooled, both loaves get sliced and one goes into a zip top bag and is frozen. When the supply in the fridge is running low, we take some out of the freezer. If we need bread and all we have is frozen, a quick run through the toaster generally makes it ready to eat. I keep an eye on the supply and when it starts running low I start checking out the calendar for a time when I’ll have a few hours to bake. The nice thing about bread, however, is that even though it takes a long time, that time isn’t labor intensive and you can do a lot of non-bread related tasks during the rising and baking phases.

How do you keep the yeast from dying? And how do you know when it’s done rising?

I have been incredibly lucky with my yeast. I use basic supermarket yeast, such as Fleischmann’s or Red Star, which I store in the fridge.

I don’t take the temperature of my water or other liquids, I just use my fingers to test whether it’s warm. In the winter I often turn my oven to warm and rise my dough on top of it. Most modern recipes give specific times and/or sizes (doubled in size, etc.). I follow those guidelines and generally things work out. I have had a few loaves that didn’t rise much at all, especially before I figured out that my apartment was too cold in the winter, but even flat bread still tastes pretty good.

What recipe do you use?

I’ve used several different recipes in my bread-baking journey. I’ve had success with the following recipes:

As happy as I am with the bread I’ve made, it’s not perfect. The loaves I’ve made have a very high white flour content. On one hand that’s awesome because I can buy ten pounds at a time for a really reasonable price, but I’d really like to increase the amount of whole grains.

I also want to experiment, at some point, with sourdough and other starters. Starters are an entire additional level of time and effort commitment, so we’ll see when I get the motivation to actually try it.

Any more questions about bread baking? 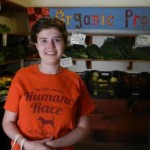 Teacher by day and blogger at relishments.com whenever time allows, Emily has been writing about food, cooking, western Massachusetts events and technology on her site since 2008.

Comments on What do you mean you “bake all your own bread”? And answers to other frequently asked bread baking questions