Did you know that at any given time, 10% of adult workers are being bullied on the job? Or that around 30% of us will be targets of bullying at some point during our careers?

I was the target of workplace bullying. I had been a great employee; I was even awarded Employee of the Month! After awhile, I became the person who knew the job inside and out, and could do it in my sleep. I was a little bored, but competent and content. According to the Workplace Bullying Institute, targets are usually independent, ethical, nurturing, “‘go-to’ veteran workers to whom new employees turn for guidance.” That was me in a nutshell.

In 2003, Pamela Lutgen-Sandvik defined a cycle of Employee Emotional Abuse (aka bullying). Here’s how that exact cycle played out in real life…

The 6 stages of workplace bullying

STAGE ONE: Initial incident
This could be anything, including being hired into a new position. The bully may be jealous, feel threatened, feel you wronged them in some way, or be experiencing turmoil in their personal life.

I believe the incident that triggered my bully was when my coworker had a last-minute opportunity to take an international trip the same week I that had taken off for a trip. He asked to switch our time off, and, after I said no, he started treating me differently.

What happens when your personal photos go viral and you get attacked online?

STAGE TWO: Progressive discipline
This is the stage when abuse becomes normalized because the abuser is in a position of power, and technically behaving legally.

In my case, my coworker was eventually promoted to shift lead, and treated me like I was incompetent — overreacting to small mistakes (even those which I quickly and easily fixed without incident). Nothing I did could please him.

STAGE THREE: Turning point
This is where it gets personal. Abuse is repetitive, and events are reframed by the abuser so targets are made to seem like the problem.

When I confronted my coworker about the issues I was having, he made me feel like the bad guy with responses like, “No one else has a problem with me, so it seems like you’re the one with a problem.” I started to wonder if there was something wrong with me. I sometimes felt like I was losing my mind.

STAGE FOUR: Organizational ambivalence
The target informs management or Human Recourses, who either steps in and confronts the bully, mediates the situation successfully, or does not help at all.

In my case, it was the latter. I mentioned to the manager that I was having trouble working with a coworker, and they told me that I needed to learn how to work with people. Because most of his infractions were minor, I was accused of overreacting. I started to wonder why should I care about the company when the company doesn’t care about me?

How to be successful as a fat woman at work

You may have read that tagline and thought, what could the difference be? Women are women. I agree with you! We should all be treated the same. But as study after study shows, weight bias is a very real issue that millions of people face daily.

STAGE FIVE: Isolation
Feeling alone, like there is no one to turn to. Your family and friends, at this point, may even get sick of it and tell you to stop complaining.

I dreaded going to work on days when I knew that one coworker was there. Some nights, I was so stressed I had trouble sleeping. I hated my job and wanted to quit, but had nothing else lined up. I didn’t want to say anything to coworkers, because I didn’t want them feel like they had to pick sides. At least I had emotional support of friends and family.

STAGE SIX: Expulsion
The target leaves by transferring, quitting, or being fired.

I was eventually terminated. After the initial shock and sadness wore off, I was absolutely relieved. I don’t believe I was let go on rightful terms, but part of me didn’t care. I don’t know whatever happened to him, as I lost touch with all my former coworkers, so the cycle may have restarted after I left.

How I deal with online hate (as someone with 20k+ followers)

I get a lot of messages of support and kindness every day from people, both men and women, who say that seeing me, a fat babe, being so confident and at home in my skin is inspiring to them. I also get a lot of hate messages every day from trolls who tell me to kill myself, send death threats, and tell me I'm ugly using every kind of language imaginable. So, how did I get over it? How do I not let the hate get to me...

So… what do you do if you are being bullied?


Speak to someone above the abuser or someone in HR. Put it on record. A friend in HR told me that her company conducts anti-bullying training during orientation, and that many people do not realize when they turn into “Mean Girls.” Employees have complained and she has intervened several times with success.

Have you experienced workplace bullying? Did it seem to follow those stages? Did anything solve the issue?

How do you deal with an adult bully in the family?

For about a decade, I've been handling a cycle of bullying from an in-law. It's not exactly like a workplace bully -- I can't just quit my family. But I'd like to be able to not focus on this person while at family gatherings and somehow enjoy myself with the people there that I love. Anyone got any advice for this? 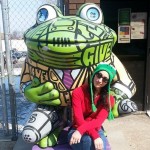 I am a grad student obtaining a degree in Human Resources. I live with my awesome husband and two cats. When I'm not at work or school, you can find me cheering at a baseball game or dancing like it's 1965.

Comments on Workplace bullying: It happens, it sucks, and here’s what you can do