Skip to content
My kiddo is three years old, and the girl is fierce. I think most parents agree that any toddler can be a handful, and mine is no exception. I make jokes that she could go a few rounds with the Devil himself and win, but really, she’s pretty normal. Well, on the high energy and hard-headed end of normal.

I don’t know a lot about parenting, since I’ve only been a step-parent for four years and a bio parent for less time than that. What I do know, aside from having ALL my notions about motherhood, children, and life-after-kids utterly demolished, is that my daughter navigates this world better than I do.

Thus, I present my case that my toddler — and really, most kids her age — is smarter than me:

She feels things out loud

If she’s pissed, we know about it. Happy? Can’t be ignored. Whatever she is feeling at that moment, she is fearless about letting us, and the world at large, know. Me, I’m more of a “shove-that-shit-down-until-it-gives-you-cancer” kind of woman. What can I say? Feelings are super hard.

She eats until she is satisfied

Who does that? Rhetorical question, don’t put your hand up. If I find a food that I love, I make it my personal mission to create a world shortage of said food. It doesn’t matter if I’m hungry. Hunger is irrelevant. I love me some good mouthfeel. And I hate me some mornings after.

I think this is a sign of a wise person. Most parents know that feeling of having your child excited to see you, or take solace in your arms. I think that’s stuff that keeps us from selling them when they’ve painted the walls with poo or stuffed Play-Doh into the keyboard. That unguarded love, shameless, visible… I suck at that. I’m no Dark Knight, but I take some serious time to warm up and say the “I love you”s out loud.

How can we celebrate our kid’s birthday without a cake?

My son's first birthday is fast approaching, and I am debating whether or not to make him a cake. He hasn't eaten anything with sugar... Read more

She don’t give a damn

Enjoys public dancing, ignores dirty looks, talks to strangers, pets all dogs, wears silver tutus, bee wings, and winter hats simultaneously, sings her own version of Twinkle Twinkle Little Star, chases bugs… etc. The kid is fearless (a little too fearless for this nervous mom). Even after a bad experience, she just keeps going. I give up if the wind changes direction. I hate change. And new stuff. And outside. And hard.

I love that about her, even if it makes for the occasional awkward social interaction. I trust her judgement, though. Sometimes, it’s just a beard issue (she doesn’t trust the facial hair, and I don’t blame her). Sometimes, it’s less evident. I never force her to get close or speak to a person she doesn’t care for, because I would hate that being done to me. I, however, have put up with WAY too many heebie-jeebies in my time. It rarely turns out well.

The child is incapable of holding still for a millisecond. I have an idea on the back burner that I would call “The Baby Workout.” Basically, an adult would just have to do all the same things a baby or toddler would do for half an hour a day. In my case, I would: run to the store and down most of the aisles, jump up and down all stairs, use the slide at the playground 43 times in a row, somersault out of bed, and crawl under every chair. I would be crazy-buff by the end of two weeks. I fight my temptation to make her slow down because god knows, she’ll be a sloth when she’s grown if she has any of my genes.

Now, I know that she has yet to learn a lot of less-than-noble, adult behaviours. Only time will reveal what neuroses creep in as she ages. Right now, however, she is who I want to be when I grow up. 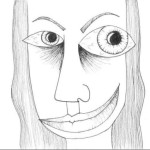 Mixed bag of procrastinating artist, social media freelancer, mum and step-mum, wiseass, wife, with a touch of the mentals. I draw, I blog, I patty-cake.