While shopping at a home decor store for some side tables, my wife and I came across what we thought was a cute little floral glass light shade. Unfortunately it was just a candle holder, but I figured with a little ingenuity I’d be able to modernize it and make an electric fixture out of it.

It took me a few weeks to brainstorm and figure out how I would retrofit the shade, but I finally decided I would use a simple mini pendant light fixture, shorten the wire, and somehow attach it to the shade. I headed to a hardware store with a Christmas gift card (thanks in-laws) and found exactly what I was looking for in a Portfolio Matte White Mini Pendant Light Fixture. I also got a Portfolio 10 inch Ceiling Medallion to add a little class to the final install.

I still wasn’t sure exactly how I was going to marry the pendant light fixture to the shade, but I did know it would involve some sheet metal and tin snips. Since I had neither we headed to the hardware store, hoping that inspiration would find me as we wandered the aisles (as it usually does).

Once there it didn’t take long for me to realize that zip ties were the key to making this idea come to life. After being approached by the youngest associate in the history of the company and getting signed up for some consultation about resurfacing our kitchen cabinets, we found all the tools and supplies we needed.

The first step was to remove all the candle related bits from the shade that I wouldn’t need, so with some wire cutters I cut out the top piece and the candle holder from the bottom. I also cut off the chain used for hanging the shade. With the top removed I made a template of the opening that I would use to cut a circular disc out of the 26 gauge sheet metal. With my new tin snips I made pretty easy work of that.

Homie, Sarakenobi turned her kitchen pendant light from boring to BAZINGA! when she used a faux stained glass technique in the nerdiest possible way. And... Read more

I then drilled a hole through the center of the disk and expanded it using the tin snips (this part was not so easy). It wasn’t the prettiest hole, but it would do the job. It just had to be big enough for the light fixture to fit through. Next I drilled equally spaced holes around the perimeter of the disc and used the zip ties to secure it to the ring at the top of the shade.

Now all I had to do was slide the bulb receptacle of the pendant fixture through the disc and fasten the washer on the other side, just like any other compatible shade you would pick up at the store. The last step was to remove the existing ugly old light fixture and wire up the new pendant light fixture (don’t forget to turn off the circuit breaker kids). The fixture came with simple instructions so that was pretty straightforward. Once the fixture and the medallion were in place, it was just a matter of reattaching the shade and screwing in a light bulb.

We decided we would use it in the laundry room since it was a small room and only a single light bulb would fit inside the shade.

Overall the project only took a couple hours and cost about $65 in materials including the shade. I figured a similar pendant light from a lighting store would easily cost $100-200. I later found a similar (though larger) light at big chain store for $199, so I was pretty close. While the chain store’s pendant light is a little cleaner and elegant, who doesn’t like to save a few bucks and have the satisfaction of knowing “I did that!” 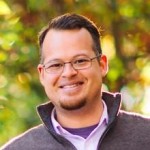 Nacstate is a web developer by trade who loves to dabble in baking, cooking and home improvement projects. He's also one half of ncsquared, a feeble attempt to document the life and adventures of a young couple who are perfect opposites.

Comments on From candle holder to DIY pendant light