Skip to content
It’s been a difficult year for the sport of cycling: the news about Lance Armstrong’s doping scandal was nearly unavoidable for months. A lengthy investigation, a weepy appearance on Oprah, an admission that his multiple Tour de France victories were all tainted by doping. But the 100th Tour de France cycling race began Saturday June 29th, 2013 and all the bad press about Lance doesn’t dampen my enthusiasm for the Tour one bit.

The days of rampant doping are long past, for one thing. Today’s top cyclists ride clean and ride hard, and our family will be watching and cheering every day. The Tour offers an entire month of shared television pleasure in our household, and you don’t have to be an expert to enjoy it. Here’s why we love the Tour, and why I think you and your kids should watch it too:

From a purely visual perspective, there is so much to appreciate about the Tour. I love the scenery and the landscape: the fields of lavender in Provence, the centuries old chateaus, the winding, narrow streets and the way the residents of tiny towns make elaborate pictures of bicycles out of hay bales for the aerial cameras.

The athleticism is unparalleled. Watching the cyclists race up steep switchbacks in the Pyrenees mountains, or summit the almost lunar landscape of the Col de Tourmalet will, simply put, blow your mind. And they ride in unbelievable circumstances: heat, cold, rain, injury. Last year, one of the riders crashed, finished the race, went to the hospital to get checked out, and discovered he had broken his tibia. That’s right: he broke his leg and just kept riding. Two years ago, a group of riders got hit from behind by a car, catapulted into a barbed wire fence, and got up to finish the race with blood pouring from their wounds. X Games got nothing on that.

Every day offers a fascinating mix of fresh drama, unexpected outcomes, and century-old traditions. There are crashes and breakaways and sprints. Crazy fans dress up in ridiculous costumes and stand directly in the path of the cyclists. Every day, all the riders slow down enough to eat a sandwich—and in old photos you’ll see the riders drinking cans of Coke while they ride. My daughters love the stuffed animals and polka dot dresses at the presentation of the jerseys every day. My husband and I love the way the British announcers yell “IT’S THE MANX MISSILE, THE MAN FROM THE ISLE OF MAN!!!!” when Mark Cavendish crosses the finish line. (And with Cavendish being touted as a potential Tour winner this year, I suspect we’ll be hearing a lot of this.) The Tour de France, as far as I can tell, is the best possible combination of dangerous athleticism, odd tradition, ridiculous fans, and gorgeous scenery.

The first year my oldest daughter, Dorothy, was old enough to be cognizant of tv was the summer I was pregnant with my middle daughter Lucy. D was about 15 months, just barely walking, and she would stand in front of the tv, transfixed, shouting CYCLE! CYCLE! CYCLE! Last summer, Dorothy and Lucy sat with me to watch the cyclists cross the finish line, and I explained how the lead out train works to launch the sprinters, and our third baby, Margeaux, stood in front of the tv shouting BIKE! BIKE! GO! WHEEEEEEE!

But perhaps you and your kids haven’t been watching the Tour since they were babies. What are some things you can help them watch for to build their interest?

Knowing when to call the game: we don’t care if our son doesn’t play team sports

As I have been diagnosed with ADD and can spot the signs, my husband and I anticipate our son will end up with an ADD... Read more

The uniforms are brightly colored and distinct. The official Tour website offers a guide to the teams, including pictures of their jerseys and lists of their riders. But even without knowing the particulars, you can easily distinguish the different teams, and after watching a few stages, you begin to get a sense of which teams are most competitive in the mountains and in the sprints. Look for the different teams, and the way they ride together to protect their best riders. The lead outs for the sprints are fun to watch, and easy for a kid to understand: the team rides single file, with the front rider going as fast and hard as he can, then dropping off to let the next guy take over, until they launch the sprinter toward the finish line. It’s also a cool lesson in teamwork: they can’t all try to win. They have to work together. And when the lead sprinter crosses the finish line, you’ll see his teammates cheering in the background before they’ve even crossed the line themselves.

Watch for the King of the Mountains. He wears a polka dot jersey, and sometimes also sports a polka dot helmet and a polka dot bike, because why not? When you’re king, you can be a little flashy. We also taught our kids to look for the yellow leader’s jersey and the green sprint jersey, and to recognize some of our favorite riders. This keeps them interested, but it also provides the hilarious bonus of hearing your three-year-old say, “Is that Ryder Hesjadel? Go Ryder go!”

The riders really do eat sandwiches. What kid hasn’t imagined being so awesome on their bike that they could ride really fast, no hands, while eating a snack? Also, sometimes the whole peloton pulls over to pee, and the announcers refer to this as a “nature break.”

Watch the crashes. After a crash, the injured riders hold onto a moving car at the back of the peloton while being bandaged, and then the medic leans out the window and gives the rider a big shove to launch him back into the race. Other reasons to hold onto a moving car while riding: you need a bottle of water, or you need a new shoe (my girls made me rewind to watch a rider change his shoe while holding onto a moving vehicle over and over last summer). My girls are fascinated by the danger that is obviously inherent in riding so close to cars, and by the fact that the riders get to break all the rules they associate with riding their bikes.

Most days, there is a breakaway (a small group of riders who ride fast and hard a couple minutes ahead of the peloton). Sometimes one of these guys wins the stage. But usually, the peloton overtakes them, and you get to watch one or two or three guys get swept up by a sea of hundreds of riders. It’s incredibly visually dramatic, especially when they show the view from street level from just ahead of the breakaway, so you see the peloton looming behind and then swallowing the breakaway riders.

The Tour began Saturday June 29th, and finishes July 21, 2013, in Paris on the Champs-Elysees, but you don’t have to watch every day: the beauty and athleticism are present in each stage. We watch our share of kids TV and I’ve learned to love The Fresh Beat Band and to tolerate Dora. But spending the morning watching the Tour with my girls? Way better than watching Diego save a cheerful sloth or an anxious tapir or whatever strange creature he’s in cahoots with today. The Tour offers genuine shared pleasure and excitement, expressed in our best fake British accents. What could be better? 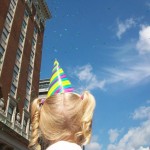 Jen Getting Jameslyn is a mom to three daughters, ages 6, 4, and 2, as well as a gardener, a part time professor, a feminist, and an avid Tour de France fan. She blogs about parenthood, pop culture, and gardening at Mama Nervosa.