Skip to content
Of all the things people felt like giving advice on while I was pregnant, no one ever told me that breastfeeding might be hard. One person warned me that sometimes it just doesn’t work, but I didn’t really get it. Why would it just not work?

Because, well, sometimes, it doesn’t. As was nearly the case with my daughter.

Before the baby arrived, I had committed myself to nursing the baby for three months, primarily because of her health issues. I went several days (maybe a week, depending on who you ask) past my due date and my doc convinced me to go for induction. I reluctantly agreed. My milk was slightly delayed because of the process of induction. On top of that, my daughter was in NICU for seven days to have a heart condition monitored, so I was trying to nurse a baby who was basically tethered to the bed.

The stress and poor diet of a hospital stay didn’t help my supply. While I had some helpful advice from lactation consultants, they just kept telling me to pump more. When I said it was painful, they told me to do nipple rolling to give my baby something to latch on to.

I went home and begrudgingly supplemented baby with formula, pumping every two hours and putting baby girl to breast as often as she could stand it. I saw another lactation consultant who put me on fenugreek, gave me a lecture about needing to upgrade from the $300 pump I’d already bought. While the fenugreek boosted my supply in just a few days, now I had full breasts and a pinchy baby. We tried all of the tricky holds and body pillows. I saw a lactation doctor who gave the baby a neck adjustment. Nothing helped.

After a few weeks I’d almost lost hope and was miserable, pumping about half of the time. Baby’s latch was awful, leaving me bleeding and cracked. She’d chomp down and rather than react in a way that would disturb her I’d clench my teeth. I bruised my molars, it hurt so bad — I never even knew that was possible. I joked that the baby was a boob shark, but it was terrible. I was counting down the days until I could stop nursing and dreading each of the 8 daily feedings to come.

I was still determined to make it work, until sometime around seven weeks, when I read a story about a woman who lost part of her nipple due to poor latch. I remember standing in the bathroom to air dry after my shower, because it hurt too much to touch them with a towel. That was when I stopped feeling guilty and decided that I was about to go to a complete pump to feed routine.

My experience with Insufficient Glandular Tissue and breastfeeding

I am mourning what I thought would happen, how I thought things would work. I am finally accepting our new relationship, and trying to not... Read more

But then things changed suddenly — my daughter had an unscheduled open heart surgery and a five-day hospital stay in ICU. When she was sedated, swollen and pitiful, all I wanted to do was nurse her. After about three days the doctors removed her intubation so that I could nurse. A nurse helped me pull the hospital chair up close to her crib, carefully moving the cords and monitor lines, showing me how to hold her to me without pressing against her incision. My baby barely woke up, but she opened her mouth when her Momma was near.

It was a few days after we were home and I was nursing her on the sofa, when it clicked. For the first time, she suckled, instead of chomping up and down. There was a soft puckering noise as she nursed, her fat hand spread out on my breast. Tears (happy ones!) welled up in my eyes.

It hasn’t been completely easy, but with time it’s improved. In her case, the health issues were affecting her latch. But as she recovered it got a bit better. As she grew and gained head control, it got easier and required less concentration. Now, at 16.5 lbs before her six month birthday she’s something of a medical oddity — a baby with a congenital heart defect that is in the seventy-fifth percentile for weight.

Yesterday, while waiting for my pediatrician to see us for a “normal” visit, I was bored and decided to nurse the baby. If you had told me four months ago that I’d look forward to nursing the baby, I’d have either laughed or punched you. But, I guess, that’s why no one tells you that nursing is so brutally hard. Because, then, you might give up before it has a chance to get good. 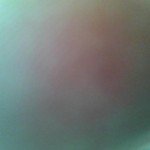 Lea is a roller derby coach turned mom, from Ohio, where she lives with her husband turned accomplice.

Comments on Breastfeeding was crazy hard — then it clicked