I began having what I thought were contractions eaaarly in the morning on October 1st, 2012. I’d had about 619,372 Braxton Hicks and had been losing my mucus plug all of the previous week, so I figured these were the real deal. I had been frustrated and was begging for a clear sign of labor, so I took this as it. I timed the contractions for an hour or two, and they were already jumping around between four and seven minutes apart.

I knew that if this was the real thing that I had to get some sleep, so I made a valiant effort for a few hours. My husband, Ryan, came downstairs to check in, and as began stuttering the word “contraction” while still believing this could all stop in an instant. We agreed that Ryan should head to his morning meeting and then work his way back home from there — I had a 2PM appointment with my midwife that day, so I texted her about my physical state and received orders to check in around noon that day. We were optimistically hopeful that this might be it!

My dad was staying with us at the time, and after Ryan came home we headed over to a shopping center to walk around. Shortly after the short parade around the building I was ready to go — I was uncomfortable walking around, and was feeling primordially weird about being out in public. So we went back home, and soon enough it was time to check in with our midwife. After listening through a contraction she determined we were in active first state of labor.

Although we had decided to wait a little while longer to tell friends and family that this would be the day, we let my Dad know that we were in this for the long haul — he’d been patiently keeping himself occupied downstairs and was amazingly calm the entire time. My husband and I went upstairs and got to work. We labored at home for a few more hours — changing positions frequently, jumping in the tub, and occasionally walking around. Ryan and I had a fantastic rhythm: as a contraction came on I’d either tell him or motion to him, throw my arms around his neck, and vocalize or hum through their height.

He was 100% completely there for me. Never once did I get annoyed that he was on his phone, or wasn’t paying attention. He was totally focused on me — trying to anticipate my every need, learning quickly what I wanted and didn’t want, and in retrospect I realize he was probably counting to 30 in his head just so he could tell me the contraction was “over.” This snapped me back and made me realize he was right, every time, that the contraction was rolling off. He was a rockstar.

In the middle of the afternoon, contractions starting hitting harder. Ryan announced, not asked, that he was calling our midwife. I grumbled. But I did talk to her, and her general consensus was: I was already well into active first stage, quite serious, but talking in between contractions (then she laughed and said I “didn’t sound happy”) so give her a call in another hour unless anything changed.

Only 10 minutes after talking to her, contractions started coming quickly and more sporadically and I began to get nauseous at their height — even in my state I knew it was a sign of transition. Even though I never got the classic “I can’t do this” mindset, I suddenly felt out of control — more of a “I have no idea what the hell I’m doing” mindset. I only had to say it once and Ryan knew it was time to leave.

Tara and Mike's daughter, Quinn, was born at 42 weeks (O.M.G.) with the assistance of castor oil and awesome parentage.

We grabbed our bags, hugged my Dad, and off we went. An incredibly long 15 minutes and about five contractions later, at 4pm, we arrived at the birth center. I soon got checked and when our midwife announced I was 8-9cm with a bulging bag of waters, my reaction was fuck YES!, which elicited laughter from Ryan and our midwife and apparently all the other midwives who were outside in a meeting. Then I labored through a few more contractions, went to use the bathroom and bam: water broke conveniently on the toilet. And on top of that? Nice and clear. All I remember thinking is: phew, we’ve passed one more hurdle!

All the while our midwife had gotten to filling up the tub, which I promptly jumped into. It was glorious! At about 5pm I began to feel “pushy,” which I relayed to my midwife, and she checked me again. I only had an anterior lip of cervix left and she wanted to move it out of the way, which was seriously unpleasant. Second stage was a solid 2-2.5 hours, and I pushed in almost every position possible — the midwives went down the list afterwards and we all agreed I used every position at some point — from the tub, to the bed, to squatting on the floor. Then a birthing stool, all fours, the toilet, and finally back to the bed.

Truth be told, I was not totally prepared for the pushing stage — I felt I had prepared myself so much for first stage labor that I hadn’t adequately wrapped my brain around second stage. Many women said they felt relief and excitement during this time, but all I felt was pain and frustration. I remember saying out loud that I needed more encouragement, that I didn’t know WHAT the hell was wrong with me — why was this hurting so much?! And, of course, that “I just needed a break.”

But through all my angry-mama-in-labor-griping the midwives were calm. God, were they calm. My midwife reminded me gently that the baby was just wanting to get out. It was the no-nonsense that I needed to hear, and they encouraged me to reach up and feel that the baby was getting lower.

In retrospect it took me a half an hour just to learn how to push effectively. Between changing positions, getting discouraged, and having to keep a close eye on baby’s heart tones (baby very much preferred some positions and not others, now that I look back it was classic cord compression), I felt like I lost control at more than a few times. But Ryan was there helping me relax, and the midwives were there reminding me to breathe, and as I could feel the baby getting lower and lower I got more and more determined.

Finally, Ryan and the midwives started to get excited, telling me they could see the head. This went on for a little while longer but I now felt focused: I had to push strong, not hard. The baby was close. And as I felt the baby’s head crown I vocalized loudly — not out of pain, or a ring of fire, but simply from the culmination of all my hard work, all the INTENSITY of knowing my baby was close to being on the outside. Then, in a moment, the head was out, followed quickly by a body, and our baby was immediately placed on my chest.

After a moment of shock I asked my midwife if it was a boy or girl and her reply, which made me laugh: “I’m busy, check for yourself!” I finally lifted our baby up and yelled/cried the well-worn phrase: “It’s a GIRL!” She stayed on my chest for almost an hour and a half while Ryan began to spread the word. I remember lying there, almost in shock at what I had done. The room was quiet, except for a few soft sucking sounds.

Soon enough, people began to trickle back into the room — our midwife scooped up our little girl while I got to shower, and announced that Norah Lynn Self was 8 lbs 6 oz, 20 inches long. My dad came by with food and in no time we got to see her all wonderfully bundled up, and my husband held her for the first time.

We love her to pieces, and our midwives were absolutely fabulous. To each their own, but I wouldn’t trade my experience for anything. As for the unmedicated aspect? I don’t have anything to compare it to, and it was hard work, but completely worth it. Although I would use the word painful, “intense” paints a much more accurate picture of my labor and delivery experience.

Being a Monday, our Bradley class instructor was at the birth center with a new class that night — around 9PM she came in and got to meet our little girl! It was awesome, and we are eternally grateful for everyone who was a part of Norah’s grand entrance into this world. 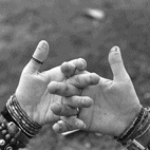 Elisa is a running, drinking, midwifing-to-be mama to two dogs, a cat, and a baby human.

Comments on A happy and healthy birth center story