Reader Pink sent me a link to a story a couple weeks ago, and my jaw dropped when the first photo loaded:

So, what we have here is a steampunk pipe organ desk. It belongs to Bruce and Melanie Rosenbaum, who, as I discovered through thorough e-stalking, have steampunked their whole house. Bruce was kind enough to chat one evening last week, and tell all about how his family ended up in a steampunk dreamhouse.

Soon after the Rosenbaums bought the house in 2000, it needed alllll kinds of roof work. It went deep. And it got Bruce and Melanie started on updating the home — they set a goal of one project a year.

They began with the bathrooms, completing them in a Victorian style with high wainscotting, new fixtures, and plumbing. And then came the kitchen, begun in 2005.

The kitchen's redesign flowed through a desire to mix Victorian sensibilities and well-made pieces with modern technologies — the Rosenbaum's weren't even familiar with Steampunk. WHAT. They started finding pieces they loved — like the giant JL Moth Defiance #18 (the stove pictured above) — and giving them new life. Erickson's Antique Stoves modernized the Defiance, and it began the Rosenbaum's "almost obsessive" exploration of the retro-future aesthetic.

They moved on to repurposing a printer's desk into a huge kitchen island. And when the kitchen was complete, it became a sensation with all the visitors. One day, a friend exclaimed, "Hey, you guys are steampunking!" And Bruce was like, "We're…what?"

So the Rosenbaums researched steampunk, and soon embraced it as a creative design solution — and they've continued on in their projects.

In talking with Bruce, it was so fun to see how his family's steampunking lines up with the ideologies growing in our culture over the last few years: doing it yourself, reusing, upcycling, salvaging, honoring craftsmanship and, most Offbeat Home of all — making your home reflect your style. He also turned me on to a pretty cool nod from Nowell Turner, the editor-in-chief of House Beautiful, who said in December steampunk is "what's next" in 2011.

So how does this stuff happen? Where do these new Victorian creations come from? Sometimes Bruce makes them, but more often he has an idea, then commissions the right people for the job. Melanie's background is in design, so she plays a big role too — sometimes the pair gather pieces for a new creation and draw up their vision before handing the project over.

They've gotten good at what they do. In addition to his full-time marketing gig, Bruce now works as a steampunk object designer (and licensed contractor!) with their business ModVic.

The family works hard to ensure their home is filled with beautiful, utilitarian objects — not museum pieces. They say the atmosphere is warm and welcoming, and visitors feel comfortable exploring contraptions and asking questions.

The next project is to transform what was once a basement summer kitchen into a workshop and steampunk showroom.

Steampunkworkshop.com has another album from Melanie and Bruce's pad: you can take a closer look at the incredible desk here.

For more information on anything made for the home, visit ModVic's resources page. 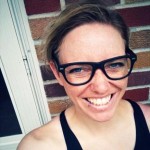 I was the Managing Editor of Offbeat Home for a year and a half. I have a rich Internet life and also a pretty good real life. Hobbies include D&D, Twitter, and working on making our household more self-reliant. I also draw things.

We wanna slide into your DMs

The Afterglow is the new subscriber-supporter newsletter from the publisher of Offbeat Home & Life.

Shitshow to Afterglow: posts related to the next Offbeat book

Memoirist ethics, aka how to write your story without being a dick about it
Exhuming love
Microdosing pain: how to make things suck less, by sucking more
Opposite Action: using negative emotional prompts for positive outcomes
False dichotomies: What if the opposite of trying too hard isn't being lazy?
Resilience reading: Books to help with the bounce-back
Hidden Blessings: Dispatches from the midlife trenches
Book club: Spiritual Dimension of the Enneagram

This website isn't as active as it used to be, but if you want to follow along with our publisher Ariel's newest work, you can pre-order her new book, From Shitshow To Afterglow.

The Afterglow is the new subscriber-supporter newsletter from the publisher of Offbeat Home & Life.