We've talked about kids and the spectrum of gender before, but one blog commenter had some great tips for getting kids through a typical developmental phase where they start to define people with rigid gender roles. Read on for some tips…

"It turns out that for young children, initial concepts about gender are quite flexible. In my own research, I’ve found that children don’t begin to notice and adopt gender-stereotyped behaviors (e.g., preferring colors like pink or blue) until the age of 2 or 3. A few years later, their concept of gender becomes quite rigid, and although it becomes more relaxed by middle childhood, even adults have trouble going back to thinking about gender as something that’s flexible."

"For Young Children, Concepts of Gender Are Quite Flexible" Slate March 30, 2016

What's the deal with gender-neutral parenting?

In recent years, however, we’ve seen a trend come about: parents are now choosing to raise their kids in “gender neutral” ways, eliminating any preconceptions... Read more

I've seen this play out watching parenting in my queer community and also working at a local Montessori school. Categorizing the world (including based on gender) is a really important developmental phase and one that kids shouldn't be shamed for. However, introducing kids to many incarnations of gender is important.

Kids categorizing and gendering items and people is based on what they see around them. I know this phase can be REALLY hard for a lot of gender-bending parents… kids can go through phases where they say things that feel very problematic to folks post-binary. Also — the whole "x is better than y" or "only a's wear b's" phase just gets under some folks skin more than others on principle.

Here are my tips for getting through this phase:

Remember, your kid doesn't need to walk away from any given conversation with the "right" way of viewing things and kids' views of the world change constantly. The kid who argues you to the death that short hair is for boys only (despite you identifying as female and having short hair) one day will be the same kid you witness correcting their friend that anyone can have short hair who wants to the next day.

"Are you a boy or a girl?" How do you explain gender to a child?

My kiddo is biologically male, but when kids ask him if he's a boy or girl, he says, "I'm me. I'm a person." Kids, however, don't accept this answer and…

Alok feels that the concepts of masculinity and femininity shouldn't have relevance in this day and age. "We need to be much more colorful, expansive, and precise about what we… 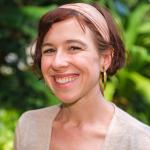 Rodin is a nurse and midwifery student interested in all possible intersections of healthcare and queerness and parenting. She lives in Tucson, AZ with her husband, two kiddos, parrot, and giant dog named Mouse.

NEXT
How community theater changed my life